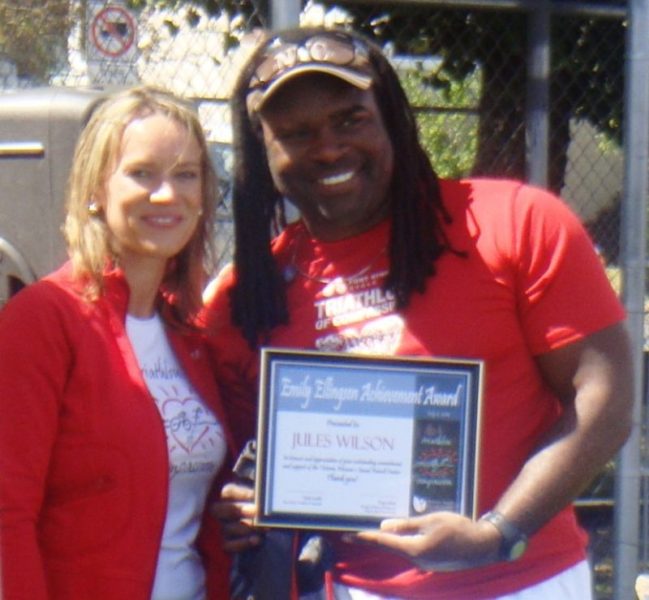 We are so happy to introduce Jules Wilson to you!  To us, Jules is very special.  Jules has been participant in the Triathlon of Compassion for the past 10 years, as well as being a dedicated volunteer fundraiser for the Victoria Sexual Assault Centre (VSAC). Over the past 10 triathlons, Jules has raised over $25,000 for the Victoria Sexual Assault Centre!  Most importantly though, he has been a strong and passionate ally in creating awareness for not only VSAC, but around the issue of sexualized violence.

We recently had the chance to talk with Jules about his 10 year anniversary of being a strong supporter of VSAC and his personal journey of how and why he got involved with the Triathlon of Compassion:

How did you first get involved with the Triathlon of Compassion back in 2006?

I was coming off a second Achilles tendon rupture in just over a year.  I was feeling at odds with my body and looking to find a challenge to motivate a return to health.

At the time I was also looking to volunteer more in areas I felt passionate about and then while searching for event races linked to causes came across the Triathlon of Compassion.  It merged two goals for me at that time and seemed like the perfect fit!

I was hesitant to try to connect with VSAC at first as I had tried to volunteer with various agencies doing violence against women support and awareness work in the Lower Mainland only to be turned away multiple times due to my gender and the philosophical approaches of these agencies.  Nonetheless I figured I would give it a shot and was very surprised at the encouragement and support I received from Tracy Lubick and that relationship kept me connected and survived through transitions to Lenore Kennedy and then Lindsay.

You have been an unbelievably dedicated fundraiser for the Victoria Sexual Assault Centre.  Why is supporting this issue important for you?

In high school I was witness to a disturbing event at a party that I came to late because I was working.  It involved someone close to me at the time being abused while intoxicated and partially conscious and unable to provide consent for what was occurring. When I tried to intervene, I was threatened physically and chose to stay silent out of fear for my well being.  Having to see those involved for the next two years brought about a range of emotions in me.  During high school one of my friend’s also disclosed they were leaving an abusive situation at home that led them to a life on the streets.  This relationship continued well after my graduation and there were many late night calls to be picked up stranded and requests for a safe place to stay for the night.  This trend continued over the years with other friends and partners who shared experiences of being abused and trying to deal with the lasting trauma to secure a healthy lifestyle and relationships.  This added to the evidence and learning about the direct impacts of sexualized violence on children, youth, women and Trans people as well as the need for accessible, inclusive supports and awareness.

Years went by again when I started having recurring thoughts of that initial high school experience and I had to seek some help to process my feelings of helplessness and vulnerability, shame and self blame for not doing something different.  It was then that I was introduced to the idea of deconstructing masculinity and the role I could as a play as a support to survivors and raise awareness for a different form of masculinity; one that included emotional regulation, speaking out against the constructs in society that support a rape culture and relying on self awareness and self confidence to be an ally.  Soon after this work I found VSAC.

Although after every triathlon I say I can’t do it again, the support of my family, friends and VSAC staff provided the meaningful connection I needed to continue to find new and creative ways to support awareness and speak out against sexualized violence.  Also the stories other survivors have shared with me year after year, after each campaign kept me driven to go one more year.

Now I am a proud partner of a survivor, a father to a beautiful daughter and I’ve seen my relationship to this work shift and the importance of this work grow even stronger.

The amazing supporters, staff and volunteers from the Tri of Compassion over the years allowed my love for the organization to grow and develop over time. You folks ROCK!!!

Beyond raising money for VSAC, what are your goals with your fundraising campaign?

Well a key part of my campaign is always to learn more about the impacts of sexualized violence and to try to find ways in which as a man I can hear the message clearer and get in tune with the true impacts of this societal problem.  I figure if I can help one supporter feel like they have another tool to create a conversation, if I can allow one survivor in my network to feel like they are heard, if I can show my campaign to my partner and friends and receive their endorsement that the message is meaningful then I have done what I set out to do.  I also want to create space for communities to move beyond victim blaming and ignorance into a phase of open communication and pause to think critically about what drives the rates of incident of sexualized violence.

Most importantly each year I strive to put together a campaign that VSAC and its membership and staff would be proud off and feel comfortable to use in the community as a creative resource to garner support and raise awareness.

Are there any special moments that stand out for you over the past 10 years with doing the Tri of Compassion?

Every year is special to me for different reasons but here are my top 4:

Jules a testament to the difference volunteers and donors have on our Centre as well as our community – and to the importance of speaking out and taking action to end sexualized violence and creating a culture of support for anyone impacted by sexualized violence.

The 2016 Triathlon of Compassion is this Sunday, June 26th and Jules is hard at work raising funds for the Victoria Sexual Assault Centre.  If you would like to contribute to Jules’ campaign, click here to make a donation.  For his 2016 campaign Jules has created his own awareness raising video – just one more example to his unbelievable dedication and commitment: