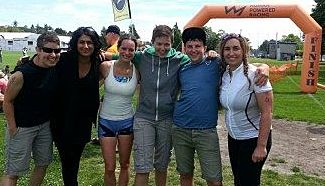 This June 2014, Triathlon of Compassion participants raised over $22,000 to support VSAC services.

Kudos to Colette(13 years old) and Hannah (14 years old) who not only won first place in their age categories, but also were this year’s top fundraisers with over $4,000 in pledges! Second place went to longtime supporter and tri participant, Jules Wilson, who raised over $3,000 this year and whose lifetime fundraising for VSAC now exceeds $20,000! Wendy Perrot, another long time fundraiser came third and won the brand new road bike donated by the Trek Bike Store Victoria.

This year VSAC showed up in a big way with five staff racing, four or which were first timers; and three of the VSAC staff went home with medals. Well done to all who participated and raised funds!

We also want to thank the hundreds of volunteers who worked hard to make the event happen, especially the Tri of Compassion organizing committee who, under the leadership of Human Powered Racing’s Rob Dibden did a stellar job of ensuring the event ran smoothly.

What’s next? Human Powered Racing is planning an Eliminator Trialthon for Sunday, August 24th. What’s that, you ask? Find out more…