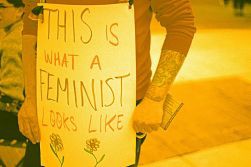 This has been an interesting and inspiring week for me, and it felt worthy of sharing. Recently, I have been contacting other Sexual Assault Centres (SACs) to learn more about their processes of becoming trans* inclusive agencies and the conversations in which I have partaken have been wonderful.

Let me start by saying that most other agencies have similar structures as us; they have a crisis line, group and individual counselling services, and some kind of prevention education component. I love that! There is something truly comforting to me about calling a sexual assault centre in Ontario and being able to relate to the work they are doing. Most of the research I did online showed me that other SACs are still predominantly focused on supporting women-identified people. I only contacted agencies that had some kind of indication on their website that they had awareness around trans* survivors, and of those agencies there was no question about trans women being welcome. Conversations about opening up services and volunteer roles to other genders, on the other hand, seems to still be a sticky topic with no clear answers.

Most of the organizations I contacted were in Ontario. I had one particularly amazing conversation with the Executive Director of the Sexual Assault and Violence Intervention Services of Halton. We spoke a bit about our hopes and dreams for projects to address sexualized violence in multiple and community-focused ways. We talked about intersectionality and the importance of addressing racism in all our conversations and services. Throughout our conversation it astonished me how similar the conversations and struggles have been at their Centre, as if there is a universal bond that brings all agencies and people working to end violence together. It made me feel as though we are not alone in this work, but rather that we are linked with so many other agencies striving to make similar changes.

Another thing that struck me was that the future of SACs is deeply connected to the organizations and government departments that fund us. For example, in Ontario a multi-year grant from the Attorney General’s office to fund SACs to provide services for men has meant that many agencies in Ontario had to ask themselves how this would impact their work. Would this mean that they open their volunteer programs to people of all genders? What about staffing, especially counsellors? From my research it seems that Centres are trying different things, some are hiring one or two men, others have kept their positions as women-only. The point is, however, that it was through a funding opportunity that Centres were able to sit down and evaluate what gender means to them, what their philosophies are, and if they want to restructure their services. While I believe it is impossible to be involved in work that revolves around sexualized violence and not talk about gender, women, feminism, or sexism on a day-to-day basis, changing your services to be more accessible to trans* folks, or people of all genders, can feel risky without a strong financial backing. (This feels like a good moment to thank the Vancouver Foundation again for their support in our trans* inclusion process.)

For the people I spoke with this week one thing was clear. Trans* people need access to support. Every Centre I spoke with mentioned that trans* people were coming to them looking for services. Trans* people are voicing their opinion about feeling left out. For some trans men there is the added sense of loss of a space and a community that they were a part of before identifying as a men. For some trans women there is the unacceptable reality of having their identity scrutinized before being able to access services. SACs across the country are asking themselves important questions about what their policies and futures will look like in terms of better supporting trans people. Conversations that have been happening for years are happening more and more as demand and need for services becomes clearer. So what road will SACs choose?

There are countless ways to approach trans* inclusion, and it is vital that any approaches SACs take are informed by trans* and gender variant people in their communities. There is still a huge gap in general knowledge or awareness about trans* people, and this affects how funding is allocated or how large government projects are determined. SACs are seeing the need but might not have the funding behind them to take the leap into new waters. It makes me wonder, what will be the catalyst for transforming conversation to action?